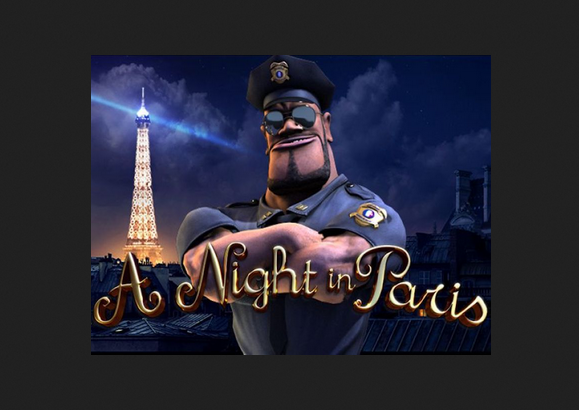 The City of Lights, as Paris is sometimes known, is famous for being one of the most romantic places in the world, but Betsoft isn’t interested in exploring this element with their A Night in Paris slot. Instead, players are invited to rob the city blind, taking part in thrilling chases and committing daring robberies under the cover of night.

Basic Info on A Night in Paris

Betsoft’s A Night in Paris slot has five reels and 30 paylines, and features an array of symbols that will bring this incredible city to mind at once. Players are required to match up at least three identical symbols, starting from the left-hand side of the screen, and between two and three of these appearing is necessary in order for a payout to be secured.

The payouts for A Night in Paris online slots range from medium to large, and largely depend on the size of the players’ bets and which symbols he or she is able to land. The lower side of the scale is represented by croissants; various statues; and the Eiffel Tower, and the higher end corresponds to images that include a young couple; a thief; and police symbols. These are able to garner as many as 1 000 coins or more, with a total of 1 250 being awarded should a player manage to land five of the police symbols on a line.

The first of the special features for A Night in Paris slot will be activated if a mixture of three specific symbols appearing alongside each other: a policeman; policeman badge and thief. When players manage to land this series of images the robber himself will be displayed on screen, and players will need to alert the policeman to his presence by means of a button that will appear on the centre of the screen. When the cop catches the robber the player receives a reward.

The Chase Free Spins game is the second of the bonus features for A Night in Paris slot, and this part of the game begins when players are able to land at least three of the policeman’s badge symbols on the reels. The free spins awarded should this occur will occur along the same stakes and lines that were in place when it was triggered.

The last of the bonus features for A Night in Paris slot takes the fact that Paris is very well-known for its wonderful museums and thriving art scene into account. Should three or more of the painting icons land anywhere on the reels, players will be invited to participate in the Caught in the Museum game and compete for various prizes. The player is invited to head out on a chase through a museum as the robber attempts to loot as much treasure as he can, before he is apprehended by the policeman on duty.

The game is widely available online, and players are able to enjoy it in both free and real money modes like roulette at https://onlinerouletteaustralia.biz/european online.