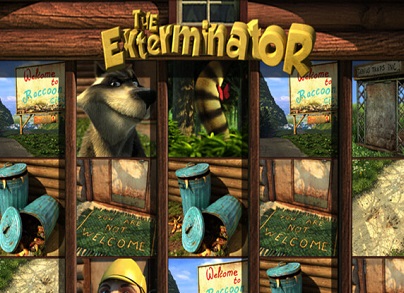 The hero for whom The Exterminator slot is named battles far bigger critters than the usual array of termites and ants: squirrels and even bears are all part of his day’s work. As play unfolds he will wage a war against a cunning racoon that lurks just out of reach, behind each corner, and when the player manages to help him locate it they will earn a significant reward in this bonus round.

The Exterminator slot is one of Betsoft’s most recent 3D releases, and the game features five reels and 30 paylines, along with a possible five coin maximum bet for each. There are various coin denominations on offer, so the possible wagers suit both more conservative players and those who prefer bigger bets.

Players need to line up identical icons across the five reels from left to right in order to form winning combinations, and there are eight different possibilities for these. Icons include doormats; traps; garbage cans; the exterminator and his nemesis, the racoon. A minimum of three matching symbols is required, and managing to land more than this amount will result in bigger wins being awarded.

The slots game has rich, colourful graphics that are displayed against a fun soundtrack. The reels are set against the background of a cabin located out in the woods, and the sound effects take this into account, with those which one would expect in this type of setting being well rendered.

Bonuses in Place for the Exterminator

There are several different bonuses available in The Exterminator slot, each of which makes use of a different way for players to boost their bankrolls. The first option is that of the wild, which is represented by the exterminator’s truck. Whenever players manage to land this icon it will expand in order to cover the whole reel, after which it is possible to form any winning combo.

The second bonus feature is a free spins feature, triggered when players manage to land five footprint symbols across the reels. It is called The Great Raccoon Chase, and random multipliers will be awarded for each spin, allowing players to multiply their payouts by a maximum of five times.

The third option is a second-screen bonus that is activated when five or more of the blueprint images appear anywhere on the reels. The side of cabin is displayed on screen, and players will try to guess where the raccoon is hiding. When a selection has been made the results will be displayed.

Gamble Feature Available for the Exterminator

Like in many available slots on internet at https://casinositescanada.net/slots, Betsoft has implemented a gambling feature for The Exterminator slot, and this can be accessed by the player after each winning spin has been completed, although it is not available during the bonus rounds. During this part of the game players will be asked to guess what colour the next card in a face-down deck will be, with the correct choice doubling the total bet. An incorrect answer will, however, result in the total amount being forfeited.